Not Just an Interpreter 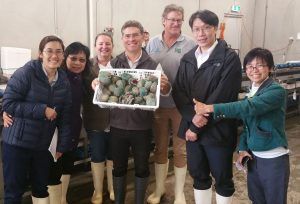 When I was studying interpreting in RMIT, I was told that converting information from one language to the other is my job. I am not to advocate and taking a neutral position is the safest bet.

A recent assignment for the Department of Agriculture and Water Resources changed my view on my role. It was a Friday afternoon. We had finished our audit in an abalone farm in Indented Head East of Geelong for the day and were on the way to Melbourne Airport to return our cars. Our Canberra-based Vet Rochelle was flying home for the weekend and she was in one car with two Taiwanese delegates. I was in the other car with a Taiwanese delegate, with another food safety inspector Shelly driving us. All the three delegates were to be taken to Melbourne city for the weekend.

We decided to take the Western Ring Road rather than Bacchus Mash to get to the airport, after running a search on Google Map at that time. But not long after we got on, the traffic on the Ring Road was in a dead lock due to an accident. We were bumper to bumper with other cars trying to exit the Ring Road. We only had an hour left from the flight time. So me the interpreter was tasked with searching for the fastest route to the airport, by refreshing the Google Map search every 10 minutes. I turned on the speaker of my mobile phone so we could direct Rochelle’s car as well. The next 45 minutes saw us busy sucking, joking, encouraging one another and searching for the latest update of the flight time. It was a relief when we finally made it to the airport in time, as the flight was delayed for 30 minutes too.

During the second week of that delegation, I interacted with them like a team member rather than the external interpreter engaged through an agency. Their goal became mine.